SAN FRANCISCO – On Tuesday, November 16, 2021, Judge Geoffrey Howard of Marin County Superior Court made a final ruling in the case against the California Department of Corrections & Rehabilitation (CDCR) and San Quentin State Prison, affirming that prison officials acted with deliberate indifference and violated the constitutional rights of nearly 300 petitioners who filed writs of habeas corpus during a massive COVID-19 outbreak in the summer of 2020. Still, the judge gave no relief to those incarcerated there, saying the initial emergency has passed due to high vaccination rates amongst the prison population.

In the summer of 2020, hundreds of incarcerated people filed emergency petitions decrying inhumane conditions after a fateful decision by CDCR in May 2020 to transfer 121 people from California Institution for Men – then the state prison with the highest COVID-19 rate in California – to San Quentin, without properly testing them first and without properly quarantining them once at San Quentin. There were no COVID-19 cases at San Quentin before the transfer. As a result of the transfer – and because prison officials refused to heed the call of an independent team of doctors and epidemiologists to urgently reduce the incarcerated population – over 2,600 people living and working at San Quentin tested positive for COVID-19 and 29 died, making it one of the worst outbreaks in the country. The crisis led to months of lockdown where people were confined to tiny cells around the clock and stoked extreme fear for those trapped inside and their families.

The cases came to court as individual “habeas corpus” petitions – emergency filings alleging unlawful incarceration under the Eighth Amendment to the United States Constitution’s prohibition against “cruel and unusual punishment.” Over 300 petitions were joined together for the evidentiary hearing in Marin County Superior Court and the petitioners were represented by a coalition of public defenders, prisoner rights attorneys, and law firms.

An evidentiary hearing finally began in May 2021 where Petitioners’ attorneys spent over two weeks calling incarcerated witnesses and medical experts who testified to the horrific conditions inside the prison and the urgent pleas from the medical and public health community that went unanswered by prison officials. The judge has now made a final ruling in this consolidated case.

The judge ruled that an overwhelming body of evidence showed that prison officials had violated the petitioners’ constitutional rights to live free from cruel and unusual punishment — including the transfer of untested people into San Quentin, the lack of screening and quarantine upon arrival, and the prison’s practice of keeping two people in cells too small for one person, even when one was symptomatic. Prison officials also acted with deliberate indifference by ignoring their own protocols and the advice of the medical community which urged better safeguards and a reduction of the prison population to mitigate the health risks and the strain on local hospitals. All of these failures resulted in 75% of the population contracting the disease, from which 28 incarcerated people and 1 correctional officer died.

Separately, the judge ruled that the months-long lockdown itself violated petitioners’ constitutional rights: “Because [CDCR] did not reduce the population as recommended, it effectively consigned hundreds of [incarcerated persons] to unwarranted, unnecessary, solitary confinement. And not just for a day or two. Where [CDCR] had the ability to move [people] to other facilities or release them, the court can conceive of no argument to support forcing [them] to remain in a cell smaller than 50 square feet, with two bunks, and a cellmate, for virtually 24 hours a day, seven days a week, for months on end. Doing so enhanced [their] exposure to COVID-19. For the duration it lasted, it also amounted to solitary confinement in violation of common standards of decency.”

The judge also reflected on how the Respondent (San Quentin and the CDCR) “historically does not safeguard inmates’ health and safety if left to its own devices.” And he cautioned that, “the record raises serious questions about whether the Respondent has learned the right lessons from the 2020 COVID-19 debacle at San Quentin.”

“The scathing judicial indictment of CDCR’s actions last year is warranted and it is too little, too late,” said Danielle Harris, a Managing Attorney at the San Francisco Public Defender Office, representing the petitioners. “This hideous example of systemic violence towards marginalized and oppressed people was wholly avoidable. If the Governor who presided over this deadly disaster still will not act to drastically reduce the prison population at antiquated places like San Quentin, the Legislature must urgently do so.”

“Prisoners subject to preventable death and disease are now being told ‘oops, sorry’ by the courts. Justice requires more — especially when this pandemic is not over,” said Charles Carbone, one of the lawyers representing the San Quentin petitioners.

“This opinion should be read and shared widely, because it contains the very important stories of the human beings who were trapped inside the prison as the virus ran rampant, and the horrors they experienced,” said attorney Tom McMahon, previously with the Marin County Public Defender.  “Members of the public need to be aware of this tragedy, and asking why it is that CDCR’s morally outrageous, unconscionable and unconstitutional actions have no consequences.”

“Judge Howard’s thorough ruling describes the many ways in which CDCR exhibited ‘deliberate indifference’ to the health and safety of the people in its care. CDCR ignored experts’ urgent recommendation for a 50% population reduction, though it had no informed basis for believing that its lesser measures would be sufficient. And as he pointedly stated, CDCR does not appear to have ‘learned the right lessons from the 2020 COVID-19 debacle at San Quentin.’ It ‘appears intent’ on pursuing the same strategy. We strongly urge the State of California to change course and to take the necessary actions to forestall another disaster, including substantial reduction of the population at this antiquated and highly dangerous prison.” 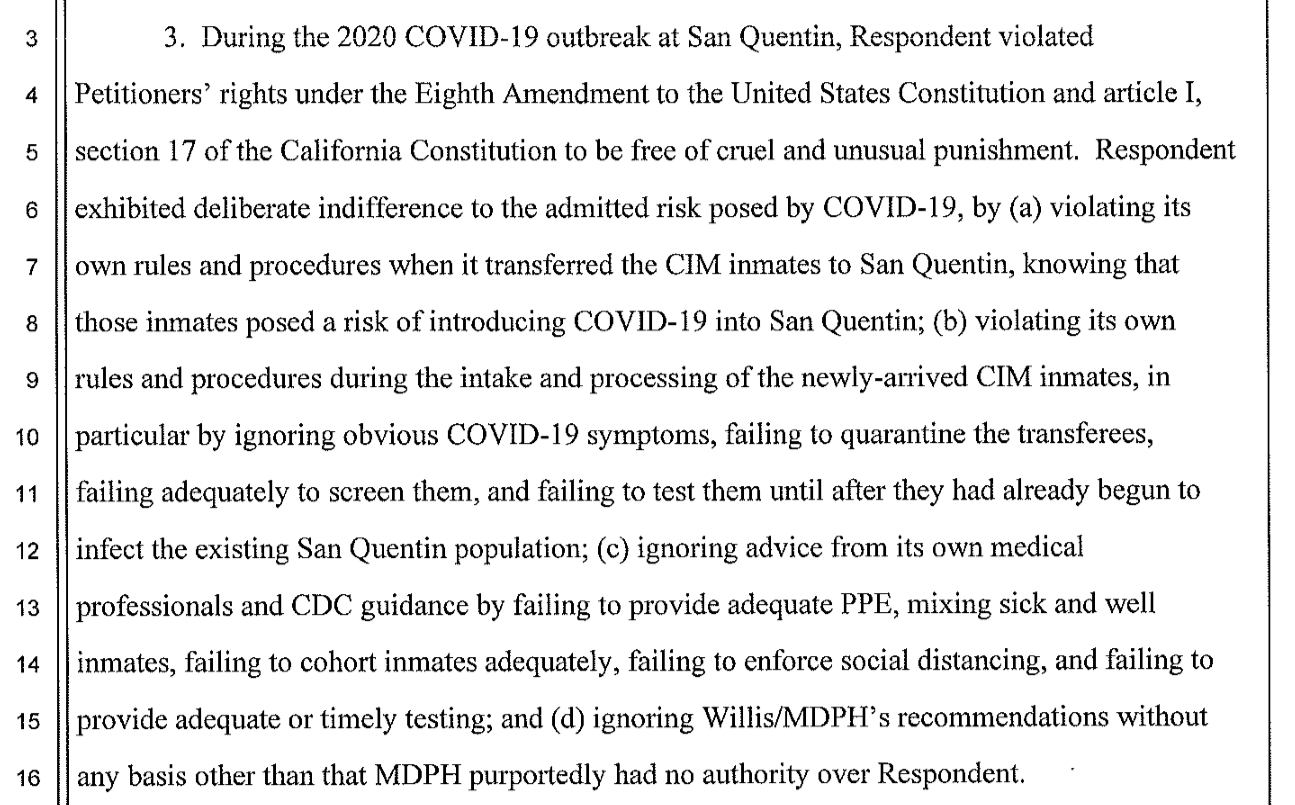 Above: An excerpt from the conclusion of the ruling describes numerous ways that San Quentin State Prison and CDCR acted with deliberate indifference and violated the Petitioners’ Eighth Amendment Rights.