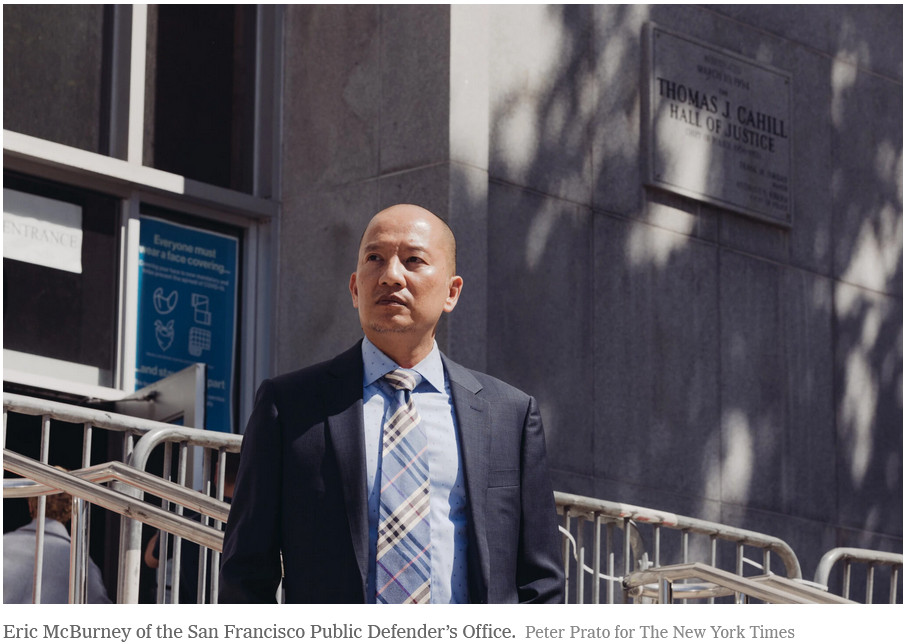 In this excellent profile by Thomas Fuller of the New York Times, he interviews Deputy Public Defender Eric McBurney who is defending Steven Jenkins, the man accused of attacking two elderly Asian people at U.N. Plaza in San Francisco on March 17, 2021. Mr. McBurney, who was born in Taiwan and adopted as a teen by a family in the American South, received general hate mail and even criticism from his extended family in Taiwan, for representing Mr. Jenkins in an act that was initially reported around the world as another incident in a string of attacks against Asian people. In April, Mr. McBurney and the San Francisco Public Defender’s Office released previously unseen video surveillance revealing that Mr. Jenkins was himself the victim of a violent attack from multiple unknown parties moments before he encountered and struck the 75-year-old woman once before being tackled by a security guard.

“It’s when the whole world is against your client, that’s when a public defender says, ‘Yeah, this is my job.’” – Eric mcburney

Excerpt below – please click here for the full article.

Steven Jenkins, a 39-year-old homeless man with a long history of severe mental illness, was arrested on charges of assaulting two Asian residents, including a 75-year-old woman who, according to the headlines flashed around the world, had bravely fought her attacker.

In an unusual attempt to dispel the notion that his client acted out of hate, McBurney in April released a seven-minute video showing the assault on Xie and the moments that preceded it.

On the day of the attacks, Jenkins, who has been homeless for the past decade, was mingling among the tents and belongings of the unhoused at U.N. Plaza. In footage taken from security cameras, Jenkins is seen being punched and kicked dozens of times by a number of unknown assailants, attacks that McBurney describes as unprovoked.

One attacker in a bright-yellow vest appears to land two right hooks to Jenkins’s face and then follows him across a sidewalk on Market Street. Jenkins staggers, turns around and swings. He strikes Xie, who is on a street corner, in the face.

Tackled by a security guard, Jenkins is on the ground when Xie hits Jenkins’s feet with a wooden board, the video shows. Not captured in the footage was another assault that Jenkins is accused of committing on Ngoc Pham, an 83-year-old Vietnamese man.

On the day of the attack, the first images that streamed around the world showed Jenkins on a stretcher with a bloodied face and Xie nearby holding a wooden board. The story of the elderly Asian woman who fought back was born.