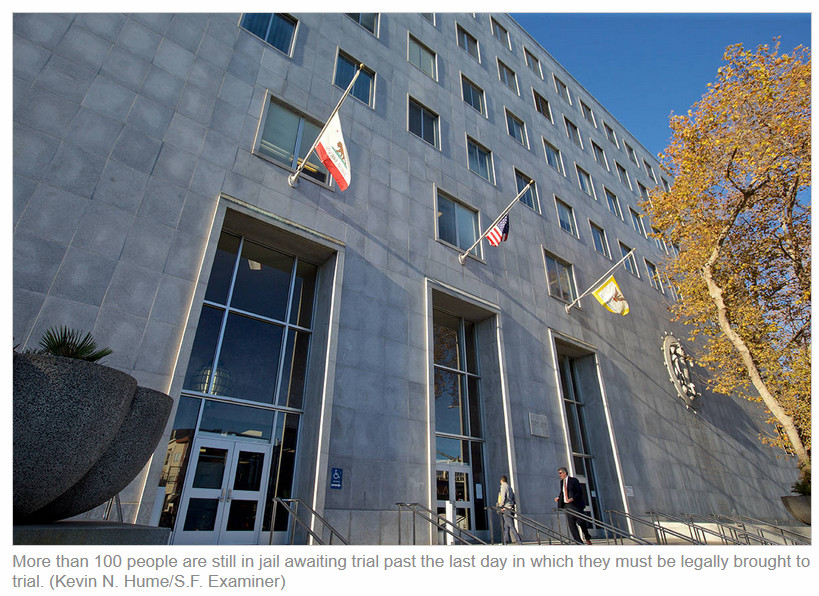 Photo: More than 100 people are still in jail awaiting trial past the last day in which they must be legally brought to trial. (Kevin N. Hume/S.F. Examiner)

The murder of George Floyd by Derek Chauvin, a former Minneapolis police officer, is a brutal and horrific example of how government institutions fund and sanction violence against people of color in this country. While the conviction of Chauvin does mean there has been some accountability in that particular case, it does nothing to mitigate the normalized, institutional harm that continues to happen at every level of the criminal legal system every day.

We do not have to look far to find it.

Here in San Francisco, over 100 people are still languishing in jail awaiting trial past the last day in which they must be legally brought to trial — the majority have been waiting over a month, and some for many months past their deadlines. The unlawful pretrial incarceration of hundreds of people, who are presumed innocent, is not just a matter of moral, ethical, and human rights — San Francisco Courts are flagrantly violating the law.

I just finished reading a letter from one of our clients who has been locked up in our jails for months past the legal deadline for his trial to be conducted. He describes the current conditions like being “housed at a super max level 5 federal prison” and during the limited time they get out of their cells daily “for one hour, 8 people are forced to share 4 phones and 3 showers… shave, get hair cut, find a book” and make any personal or legal calls.

This man has lost family members while in jail, and he hasn’t been able to grieve with his family or stay connected to his children.

Sadly, he is not alone.

People are not only being illegally held in San Francisco jails, they are being held in solitary-like confinement as a result of the jail’s COVID-19 precautions – no family visits, no programming, 23-24 hours a day in their cell, and no yard time. These punitive conditions are psychologically and physically damaging. While the San Francisco Sheriff has said they are planning to resume visits and end lockdowns at the jails at some point, there is no official date set.

These court delays are not happening in our neighboring counties. Contra Costa has held 103 jury trials since May 2020. Sacramento has held at least 118 trials since mid-March 2020. In contrast, San Francisco has held only 10 criminal jury trials in the past year, nearly ten times less than these peer counties.

We have learned from our neighbors that with the right precautions, we can safely hold jury trials during COVID. We are unaware of reports of trial-related COVID outbreaks inany of these counties. https://9488398ceb10593651f10f5e5e418e3a.safeframe.googlesyndication.com/safeframe/1-0-38/html/container.html

The reason for San Francisco’s massive backlog is because the Courts have not allocated enough courtrooms. At the Hall of Justice, at least twelve courtrooms have the capacity to hold a socially-distanced trial, yet the Court has only opened four courtrooms for trials. Another four courtrooms are being used as “satellites” where people can watch ongoing trials on zoom, but these satellites are almost always empty. The Civic Center Courthouse at 400 McAllister Street is now handling misdemeanor jury trials in two courtrooms for people who are out of custody. It has also held an eviction jury trial and conducted jury selection for a civil trial that later settled. Yet, citing unfounded security concerns, the Court is not holding any felony trials at Civic Center for people who are in custody.

Other counties have used alternative venues for trial proceedings — San Mateo is using its convention center and Sonoma is using its county fairgrounds. While our Court has been awarded emergency funding to address its massive backlog, it has not utilized any alternative venues to hold trials, nor made any documented efforts to seek them out. We know that because my office submitted a judicial records request for all records relating to the Court’s efforts to find alternative venues and to remedy its personnel shortages, and the Court informed us that there were no such records.

With jury trials being safely held in neighboring counties, businesses open, and widespread vaccinations — including 72% of San Franciscans over the age of 16 with at least one dose of the vaccine, and 49% percent having received both doses — our Court has no justification for these delays. More courtrooms should be opened up for trials, and there should be public access via YouTube for people to attend remotely – which our Court has done only sporadically while many other counties have been doing so all along.

People who are presumed innocent and caged should not be sitting in jail for one day longer than the law allows. When that right is denied — as it was for Kelief Browder, a young Black man who was accused of stealing a backpack and locked up at Rikers Island without trial — the consequences can be fatal and tragic.

Public defenders are in court every day fighting for our clients’ right to a jury trial. But so far our Superior Court refuses to honor this right, generating a huge backlog of cases and incarcerating members of our community for months after the law says they can be held.

A backlog isn’t a reason to keep a human being in jail for a single day – let alone well over one hundred people in jail for months under lockdown conditions. Nor is COVID-19an excuse for the cruelty and bureaucratic inertia. We must do better.

Mano Raju is the elected Public Defender for San Francisco.