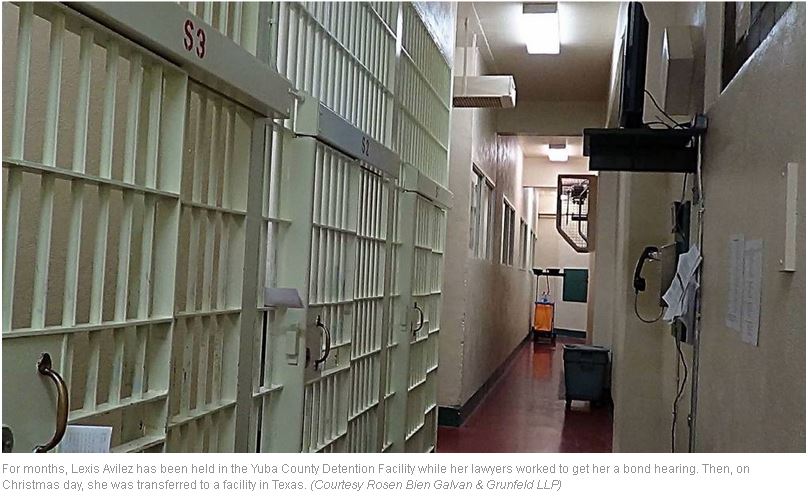 The San Francisco Public Defender’s Office is requesting an immediate hearing to have a transgender woman, who was transferred out of California on Christmas Day, released or returned to the state.

The public defender’s office filed a motion on Friday for a temporary restraining order against Immigration and Customs Enforcement (ICE) and the Yuba County Sheriff’s Office on behalf of their client, 41-year old Lexis Avilez.
Defendants have until noon on Jan. 7 to respond.

For nearly 14 months, Avilez has been held at the Yuba County Detention Center while lawyers worked on getting her a bond hearing, according to court documents filed on Friday.

According to the public defender’s office, on Christmas 2019, officials at Yuba led Avilez to believe she was being released.

“She was extremely happy,” said Deputy Public Defender Hector Vega, who represents Avilez. “She called it a ‘Christmas miracle’ and called her family to tell them she was going to be released and be home soon.”

But Vega said later that night, after she was transferred to the ICE processing facility in Sacramento, officials told her she was, instead, being transferred to the Prairieland Detention Center in Alvarado, Texas, nearly 2,000 miles away from her family and legal counsel.

“I received no notice of the transfer until it happened,” said Vega.

Once Vega finally got in touch with ICE officials, they explained that they moved Avilez to the Texas facility because it was better suited to her needs.

But Vega’s concerned that’s not the case.

“Now that she’s in the new detention center, I’ve been in talks with the new medical staff who have also not provided the hormonal treatment, and have given me no assurances that Ms. Avilez will receive the medication she needs,” said Vega.

The public defender’s office also stated in a press release that Avilez is being detained in “segregated confinement, forced to wear male clothes, and denied the ability to call her lawyer at no cost.”

“i think this has been so cruel to me,” said avilez in a statement. “ice and the other officers know how difficult the last 14 months have been for me and yet have no compassion for the way they detain me and move me around like i mean nothing.”

Avilez has lived in California for the past 40 years after being brought to the United States as a baby. After struggling with her identity for years, she began to identify as female after being taken into ICE custody in 2018. Federal officials are seeking to deport her due to a past felony assault charge.

In June 2019, during her time at Yuba, Avilez was diagnosed with gender dysphoria. At that time, Avilez’s lawyers began communication with ICE and Yuba officials regarding her healthcare, but she still did not receive necessary medication while there.

ICE officials said they had no comment regarding the case. The Yuba County Sheriff’s Office did not immediately respond to a request for comment.