WHAT: Community organizations fighting for bail reform in nine California counties will hold coordinated rallies in front of their county courthouses in partnership with public defenders to call for an end to the money bail system in California, and highlight the recent Humphrey decision, which cemented a historic change in bail law, requiring judges to consider a defendant’s ability to pay when deciding bail.  The 11 lead organizations are part of the Participatory Defense Network, and all work with families whose loved ones are facing the court system. In San Francisco, the following organizations are participating: SF Public Defender’s Office; Young Women’s Freedom Center; BMAGIC; Mo’Magic; All of Us or None, Legal Services for Prisoners with Children; CURYJ; ReUniting Families

BACKGROUND: The First District Court of Appeal on Jan. 25 delivered a decision that abolishes the practice of using high money bail to detain poor people without giving them detention hearings, as required by the U.S. Constitution. The case, brought by the San Francisco Public Defender’s Office and Civil Rights Corps, revolved around the detention of 64-year-old Kenneth Humphrey, held on $350,000 bail (initially set at $600,000) for allegedly stealing $5 and a bottle of cologne. Humphrey “is entitled to a new bail hearing at which the court inquires into and determines his ability to pay, considers non-monetary alternatives to money bail, and, if it determines [he] is unable to afford the amount of bail the court finds necessary, follows the procedures and makes the findings necessary for a valid order of detention,” the appellate court stated.

Over 60 percent of those detained in California jails are there pretrial — incarcerated due to their inability to afford the high bail amount. “The Humphrey decision is a game changer for Californians and a major crack in the foundation for the exploitive cash bail industry. We are kicking off a statewide movement to demand judges follow the law and hold new bail hearings for those locked up simply because they are too poor to purchase their freedom. The time for justice and action is now,” says San Francisco Public Defender Jeff Adachi.

Echoing the San Francisco Public Defender’s call to action, Katherine Hubbard of Civil Rights Corps says, “The Humphrey decision is a stinging rebuke of the wealth-based pretrial detention system that pervades the courts of California and provides a vital precedent for people challenging this unjust system.”

In effort to build off the momentum of the ruling, educate the public of the change, and build towards further improvements through SB10 now going through the legislature — community organizations, families of the incarcerated, and public defenders will rally in front of county courthouses.

“Women and girls continue to bear the burden of the bail system.  We are more likely to take the financial responsibility of bail, to support loved ones and we are less likely to be bailed out ourselves.  As the fastest growing incarcerated population in the United States and three generations into mass incarceration, women and girls are losing their physical and financial freedom.” – The Young Women’s Freedom Center

Organizers will also go into court to monitor the hearings, to ensure the court is respecting the rights of those facing arraignment and bail hearings. Organizers will be using the hashtag #DayinCACourt through their social media handles across the state from their respective counties during the rallies, and launching a dayincacourt.org a running blog to chronicle California’s courts and bail reform efforts from the perspective of the community. 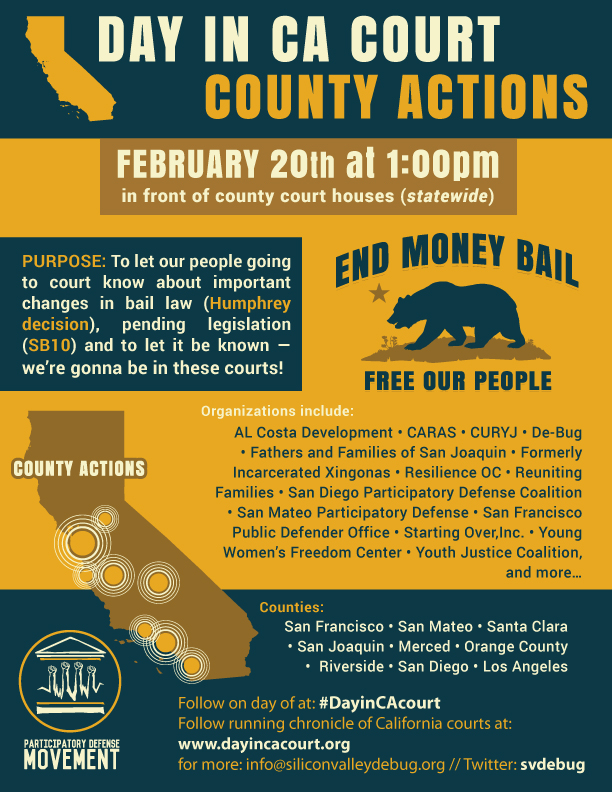