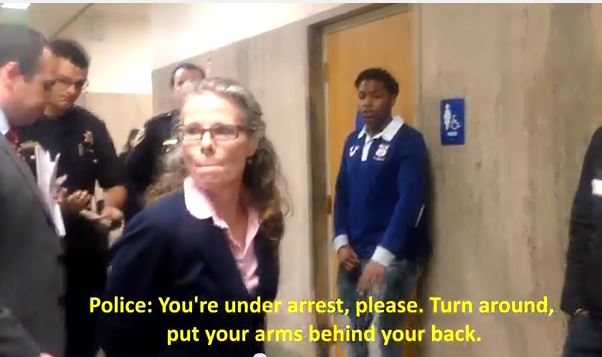 Stansbury, the subject of a 2013 federal civil rights lawsuit filed by a black SFPD officer alleging racial profiling, cites Tillotson for resisting arrest as a uniformed officer places her in handcuffs. Tillotson, an 18-year veteran of the San Francisco Public Defender’s office, remains calm and courteous throughout the video, telling Stansbury and five officers that she is representing her client and is not resisting arrest.

Officers took Tillotson to a holding cell in Southern Station, where she remained handcuffed to a wall for approximately an hour. After Tillotson was led away, Stansbury photographed and questioned her client and another young man who did not have an attorney present. Officers refused to tell the young men or Tillotson the reason for the detention.

“Public defenders have a duty to protect the constitutional rights of their clients,” Tillotson said at a noontime press conference Wednesday. “It was surreal to be led away in handcuffs for doing my job, something I do every day.”

“This is not Guantanamo Bay. People have an absolute right to have their attorneys present during questioning,” he said.

The Public Defender has requested a copy of the police report in the incident and has demanded both an explanation and an apology.

“A uniform does not give you a license to bully innocent people into submission,” Adachi said. “If this happens to a public defender in front of her client, I can only imagine what is happening on our streets.”

Video of the incident can be found at http://bit.ly/18vHKXS or watch it below.