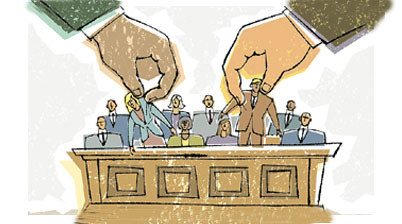 (published Jan. 21 in the Daily Journal)

Last Tuesday, California lawmakers quietly moved a step closer to eroding one of our fundamental rights: a fair and impartial jury.

The Senate Public Safety Committee voted in favor of Senate Bill 794, which would radically change the jury selection process in misdemeanor cases. Introduced by Sen. Noreen Evans of Sonoma County, and sponsored by the California Judges Association, SB 794 would substantially reduce the number of peremptory challenges available to prosecutors and defense attorneys.

California Code of Civil Procedure §231, enacted in 1851 and codified in 1872, provides that an accused person in a criminal case where the punishment may exceed 90 days is afforded 10 peremptory challenges. Six peremptory challenges are allowed for those facing misdemeanors with a sentence of 90 days or less. SB 794 would reduce the existing legal allotment of peremptory challenges for misdemeanors to five in any case in which the offense charged is punishable with a maximum term of imprisonment for one year or less.

The Supreme Court has often held that peremptory challenges are an essential means for ensuring fairness. The purpose of the peremptory challenge, the Court said, is “to assure the parties that the jurors before whom they try the case will decide on the basis of the evidence placed before them, and not otherwise.” In Holland v. Illinois, Justice Antonin Scalia wrote that “peremptory challenges, by enabling each side to exclude those jurors it believes will be most partial toward the other side, are a means of eliminating extremes of partiality on both sides, thereby assuring the selection of a qualified and unbiased jury.”

The practice of allowing peremptory challenges dates back to Roman law, when both parties were allowed to propose 100 jurors, and each side was allowed 50 challenges, leaving 100 jurors to decide the case. English common law allowed the prosecution unlimited peremptory challenges but limited the defendant to 35 challenges. The right to use peremptory challenges in the United States is grounded in the Sixth Amendment, which guarantees the right to a fair and impartial jury. This is a fundamental right not only for those facing serious charges, but those accused of misdemeanors as well.

The proponents of SB 794 argue that reducing the number of peremptory challenges will “save the courts money without reducing justice.” The California Judges Association (CJA), which is the main sponsor of the legislation, states that the bill will save money, allow the courts to reallocate staff since fewer people will appear for jury service, and result in shorter trials.  CJA also argues that the law will improve juror attitudes and satisfaction, stating that “judges report that potential jurors frequently express frustration when they watch otherwise eligible jurors be dismissed for no apparent reason” and that calling fewer jurors “means that more people will be working productively in their jobs.”

While they are rarely on the same side of an issue, both the California District Attorneys Association and the California Public Defender’s Association oppose SB 794. The California District Attorneys Association argues that SB 794 “jeopardizes just outcomes” and will increase the difficulty of selecting a fair and unbiased jury that represents a broad cross-section of the community. The California Public Defender’s Association argues that since attorney-conducted voir dire has been limited by statute, “attorneys in criminal cases are left with little resource but to use peremptory challenges in doubtful situations where a fuller examination of a prospective juror might have … disqualified the juror for cause.”

I believe that SB 794 should be opposed because of the impact on both parties’ right to a fair trial and that reducing the number of challenges will result in less diverse and less informed juries.

First, judges, who are empowered to excuse jurors for cause are not in a position to know the nuances of a case. Many judges, in my experience, take very little time to know the facts of the case and often conduct a cursory voir dire, asking only basic questions about the jurors’ backgrounds, such as employment, education and family information. Typically, attorneys in misdemeanor cases are only given 15 to 30 minutes to question 24 jurors, which is about 1 minute and 20 seconds per juror.

Second, the grounds on which a juror may be excused for cause are very limited. Code of Civil Procedure 225 confines cause challenges to jurors who are incapacitated, incompetent, related to any party or witness, a participant in previous litigation or the existence of a state of mind evincing bias towards either party. Not only do peremptory challenges allow attorneys to use their training and experience to dismiss jurors who they suspect, but cannot prove, are harboring bias, it also allows them to dismiss those who simply do not want to serve and have failed in their attempts to be excused by the judge. Such jurors are less likely to pay close attention to the evidence and arguments. As a result, the verdicts they render are less well-considered. If attorneys are limited in their ability to remove such jurors, the integrity of the system will suffer.

Third, I do not believe that SB 794 will save time. It will increase the burden on the attorneys to show that a juror should be challenged for cause. This will take more time, rather than less, because with fewer peremptory challenges, both prosecutors and defenders more exhaustively question the jurors for actual bias.

Fourth, SB 794 puts the rights of the dismissed juror over the rights of the parties. The very reason citizens have been summoned is to choose a fair and impartial jury. CJA’s argument that SB 794 is needed because jurors become frustrated when they see other jurors being excused demonstrates a fundamental misunderstanding of the process of jury selection. Being chosen for a jury is not a popularity contest, nor should the decision to select a juror be motivated by whether other jurors would be offended if a peremptory challenge was exercised. In fact, the peremptory challenge allows an attorney to search for biases during the selection process without fear of alienating a potential juror. Similarly, whether SB 794 would result in a more productive workforce should have no bearing on whether peremptory challenges are used against jurors. If that were the case, we would simply let judges decide verdicts so there would be no need for jurors at all.

Finally, there is no showing that the proposed legislation would save money. CJA claims that the measure will result in “less paper, less postage, fewer jurors to pursue for not appearing, less physical infrastructure to hold potential jurors.” These so-called cost savings are questionable at best. Juror summons would still have to be issued for the same number of people, since there is no way of knowing how many trial jurors are needed in misdemeanor and felony cases before jurors are summoned. The postage to return the jury summons is usually paid by the potential juror, not the court, and it is unlikely that jury waiting rooms would not be rebuilt for a smaller number of jurors if SB 794 passes. Any cost savings recouped from paring down peremptory challenges would surely be lost through a more drawn out jury selection process.
SB 794 should be opposed because it threatens the fundamental right to a fair trial.  The right to an impartial jury is the heart of our legal system, not the fat to be trimmed.